It’s your baby’s first Halloween, and if there’s one thing cuter than an adorable baby, it’s an adorable baby wearing an adorable costume.  If you think a photo of your 8-month-old in her bouncer got a lot of Facebook likes, get a load of what happens when you dress her up as a strawberry.  Think (just think!) of how people will fawn over your son now that he is dressed as a Golden Retriever or a tiny McDonald’s ketchup packet.

And you have known this for a while, of course.   You have enthusiastically purchased one, or perhaps several costumes for your young baby.  You have made her try them on and you could not get over how adorable they were.  Your iPhone is full of photos of your child in the costume before you even bothered to remove the tags.

And so now here it is!  Halloween!  You are super excited to show everyone your adorable baby in her adorable costume except that whoa, whoa, whoa hold on a second, where exactly do you take a baby who is not even a year old?

She’s too young to go trick or treating, and it’s weird if you yourself go trick or treating while holding her because it’s way too obvious that you’re just trying to show off how cute her costume is while also obtaining candy for yourself.  Last year you went to a Halloween party with all of your friends, but that was when you were childless– you may not know many other people with kids yet and you can’t take a young baby to a party intended for adults because

a.)    Kids aren’t always welcome at adult functions.  How will “Sexy Dracula” manage to hook up with the guy in the Green Lantern costume if your child is waddling around dressed as a duck, spilling everybody’s martinis?

b.)    Adult parties are at night when kids are sleeping.

In a way, having a child in a cute costume is a lot like this guy I sometimes see in Manhattan who walks around with a cat sitting on his head.  (I’ve seen him maybe three times.)  Yes, it is a weird novel thing that people do not normally see and yes, it is very cute, but there is no real reason for doing it.  I am not saying there is anything wrong with walking around with a cat on your head (there is not) but if pressed as to reasoning you must politely admit that you just enjoy the attention or are somehow trying to make money.

Which brings me to the question of what one is supposed to do with his or her baby now that it is dressed up in a costume.

Here are the best answers I was able to come up with.

I think everybody has figured this one out.  I think the big question is, “Yes, but what do we do THEN?  Is that all there is to baby’s first Halloween?”  And the answer is: maybe?  As far as I could figure out, the main reason for dressing a baby up for Halloween is so that everyone will “like” the photos you post of your baby on the internet.  Which is completely fine!  They are very cute photos!  (The ketchup packet costume is particularly adorable when the parents are dressed as enormous French Fries.)

This may seem sort of lame and boring and you may be sitting at your mom’s house going, “Man, this blows, I wonder what everyone else is doing with their babies in Halloween costumes?”  But probably a bunch of them are sitting in the houses of their own parents or their in-laws wondering the same thing that you are wondering.  And if there is one person excited to see your baby, it will be your mother, who will immediately take four million additional photos of the baby to supplement the thousand or so that you have already taken.

Look, this is really weird to do, but if you’ve got the balls to do it just start ringing people’s doorbells, going, “Hi, I’m a 34-year-old adult wearing Harry Potter Glasses, but take a look at this adorable 8-month-old dressed as an owl and also if it’s not too weird could I have a Snickers?”   If you have friends who have older children of trick-or-treating age, you could maybe pal along with them under the guise of “hanging out” and trick or treat without looking like too much of a lunatic.

There was a “parade” in my neighborhood for mothers with young babies and by “parade” I mean it was a bunch of women pushing strollers in a long line and nobody was really watching or paying attention or cared.  The problem with a baby-centered Halloween event is that everyone is there to show off their own children, so it is sort of like if the man with the cat on his head went to a convention full of men with cats on their heads.  When there is one of something it is a novelty, but when there are a lot of something it is noticeably less exciting.

I guess it depends on how cool your friends are with this sort of thing, but this would allow you to feel like a human being who interacts with other human beings, allow other people to see your child’s costume, and to not ruin their party (and your own evening) by spending two hours comforting an overtired, screaming infant in a monkey costume.

This was what I wound up doing last year with a child that could not yet walk and had just barely learned to crawl.  He was not aware that he was wearing a costume and he was barely eating solid food, let alone candy.  I dressed him up as a skunk and then just walked around town doing my errands.  We went to the drugstore, bought groceries, and went out for pizza.  Took the dog to the dog run and then went home.  That night we went to the Halloween parade in the West Village even though he was too young to appreciate it or understand anything.  I wondered all day if all the other people who had babies in Halloween costumes had done some super exciting thing that I was out of the loop about but I never found out.  I more or less did it for the photos and for the guy at the Pizza place who got a huge kick out of the skunk costume.  Was it worth it?  I’m not sure.  But in 10 years, when I look back at the photos and forget how the day actually went down, my guess is I’ll feel like it was. 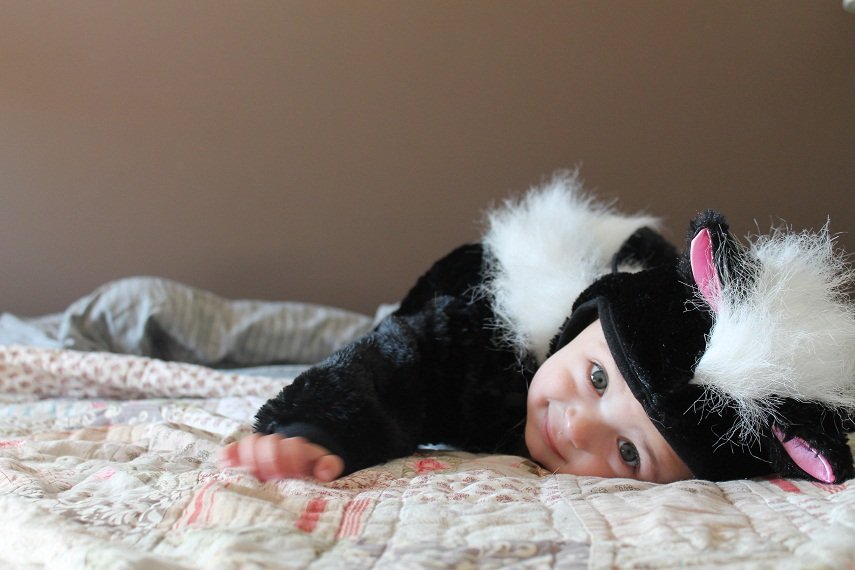 If you enjoyed this post, feel free to follow me on Facebook or Twitter or mail creepy handwritten letters to my apartment.  If you DON’T want to follow me on social media but you know how to fix a DVD player when the disc plays fine but won’t eject, shoot me a line because mine is jammed and I’m getting really tired of watching this one movie over and over again.  I’ve already unscrewed the top of the DVD player but the disc won’t come out.  Thanks.  Also, Happy Halloween and may all your dreams come true!

(Except THAT dream.  That one’s gross.)