The first few months staying home with my kid were hard because being alone all the time is rough.  And people would point out, “But you’re not alone!  You have that baby!” except that having a baby is not the same thing as having another adult person around with whom you can have an actual conversation.  You cannot talk to a baby about the new season of Orange is the New Black (no spoilers but really great) or any article on the BBC World News homepage (heads up: the doctor leading the fight against the Ebola virus has come down with the Ebola virus) or any fashion trend that you think is sort of weird. (Are bubble skirts not “the look you get if you accidentally tuck the end of your skirt into your underpants.”)

And on occasion I would venture out to a place where there were other parents (the playground, the local pool) and I would think, “Oh neat, there are grown-ups here!” which is crazy because if you went back and asked the 10-year-old version of myself if I would EVER enthusiastically say the phrase, “Oh neat, there are grown-ups here” she would laugh so hard she would spit her grape Capri Sun packet all over her stonewashed overall cutoffs.  But when I went to those places and they were empty, I would immediately think, “Where are all the other parents?  If all the grown-ups aren’t here then where are they?  What are they doing with their kids right now and is it a thing I’m supposed to be doing?

And who better to answer the question of “Where are the other parents?” than “My Own Crippling Insecurity as a Parent!”  Here are some of the answers it came up with!

1.  They Are Busily Preparing for their Child’s Educational Future

Haven’t you read all those articles saying that parents are looking at pre-schools while their children are still in utero?  That if she doesn’t get into some sort of innovative magnet school your child will grow up to be one of those people who collects cans out of the trash and recycles them for nickles.  Obviously all the other parents are at their respective apartments, desperately trying to buy real estate in neighborhoods with good public schools to ensure that their children have a shot at someday getting an internship at Conde Nast while your child makes $8 an hour selling horseshoe-shaped neck pillows to people at the airport.

Remember how you found that tutorial on how to make snowglobes out of old baby food jars and you were like, “I’m totally going to do that!” and then instead spent four hours watching as your kid yells, “Cat!  Cat” while chasing a pigeon, and the first few times you’re like, “It’s not a cat, it’s a bird,” and then after about five minutes you’re like, “Whatever, it’s a cat.  It’s a flying cat.”  Maybe the other parents had a hot glue gun and totally went all the way with the snowglobes idea.  Or the cardboard fingerpuppets shaped like robots idea.  Or they’re learning how to make pretzels in the shapes of capital and lowercase letters and either way whatever they’re doing is more innovative than watching your kid chase this flying cat.

3.  At Home Cooking Actual Food so That Their Children Aren’t Eating Avocados with Soy Sauce and Melba Toast Every Day Because That is Not Really a Meal

Another child that is exactly your child’s age has spent the last three months learning the alphabet from flash cards and your child is (congratulations!) eating mashed potatoes that he found in his ear.  While your child spends 20 minutes trying to walk up a slide, other children are learning their colors and numbers and painting with watercolors and honestly I’m not sure if those things even count as “developmental milestones” because I delete all those babycenter e-mails in a frantic attempt to try and clean out my inbox because it’s the only thing in my life over which I feel like I have any control.

5.  They Went Back to Their Jobs

They are back at their jobs!  Remember that job you used to have– the one where you received paychecks and occasionally respect?  That thing was the best!  Some of the new parents have gone back to their old jobs because if they are going to work for a horrifically demanding boss, they’d rather it be someone over two-and-a-half feet tall who does not regularly poop his or her pants and/or eat nickels off the sidewalk.

6.  They Did Not Go Back To  Their Jobs But They Have Devised A Way Of Putting their Child in a Playpen-Type Apparatus and Getting Work Done At Home

Ha ha ha I am just kidding, no one has done this.*

7.  They Are All Hanging Out Together and You Are Not Invited

As someone who was excluded from a lot of stuff as a kid, this is the first place my mind goes.  Every time.  Where are the other parents?  They are all together somewhere having a super duper great time.  They are all BEST FRIENDS.  Sometimes they all pitch in and hire a babysitter to watch all of their respective kids so that they can go out together to get matching ankle tattoos of  themselves standing in a group laughing at each other’s jokes.   During the day they are all crowded together in a communal space that they rent out together because they like each other so much and if they knew you were sitting at the playground all alone at 8:15 on a Thursday they’d laugh the way the evil villain teenagers in every 80’s movie laugh when a nerd gets tricked into going to the prom.

Except that here is the thing– I think these things every single time I’m the only one at the playground, but have found that for the most part none of these things is true.   About half the days I go I show up to an empty playground, but on the days people are there and I ask, “What do you do with your kid all day?” the answer is almost always the same exact thing that I am doing with mine:

And yes, sure,  I’m sure there are a couple people at home rabidly researching pre-schools or a few that are attempting elaborate Pinterest-style crafts or training their children with flashcards  but the vast majority look at me with the same sheepish look I give everyone and say, “We just sort of hang out.  We play.  He naps for a few hours and then maybe we read for a while.  I don’t know.  A lot of nothing.” Which is a relief.  Not that it makes what I’m doing with my child any better, but it’s nice to feel like it is more or less normal.  That there is no big huge thing that I am supposed to be doing that I am not doing and that is fine to have today as an aimless “play outside” day.  Not that there is anything that wrong with any of those other things I listed.  In fact, it’s supposed to rain later this week so a day of hanging out inside, making and learning from homemade flashcards may be in order and really, if we are being completely honest, I am even a little excited about it. 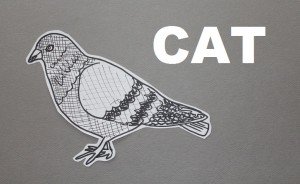 *I’m sure at least one person is dying to tell me that they have devised a way of being home with a child and somehow managing to get tons of work done while the child is awake but please don’t tell me because in a fit of rage I might accidentally murder you and then I will feel terrible.