Man:  “Hello!  Don’t you look ravishing this evening!  Would you care to join me in the bedroom and make a second child?”

Woman:  Thank you for the compliment!  Unfortunately I worked an 8-hour day and then spent two hours at home entertaining a two-year-old and unloading the dishwasher.  I am not in the mood to create a second child right now.  Thank you so much for your inquiry! 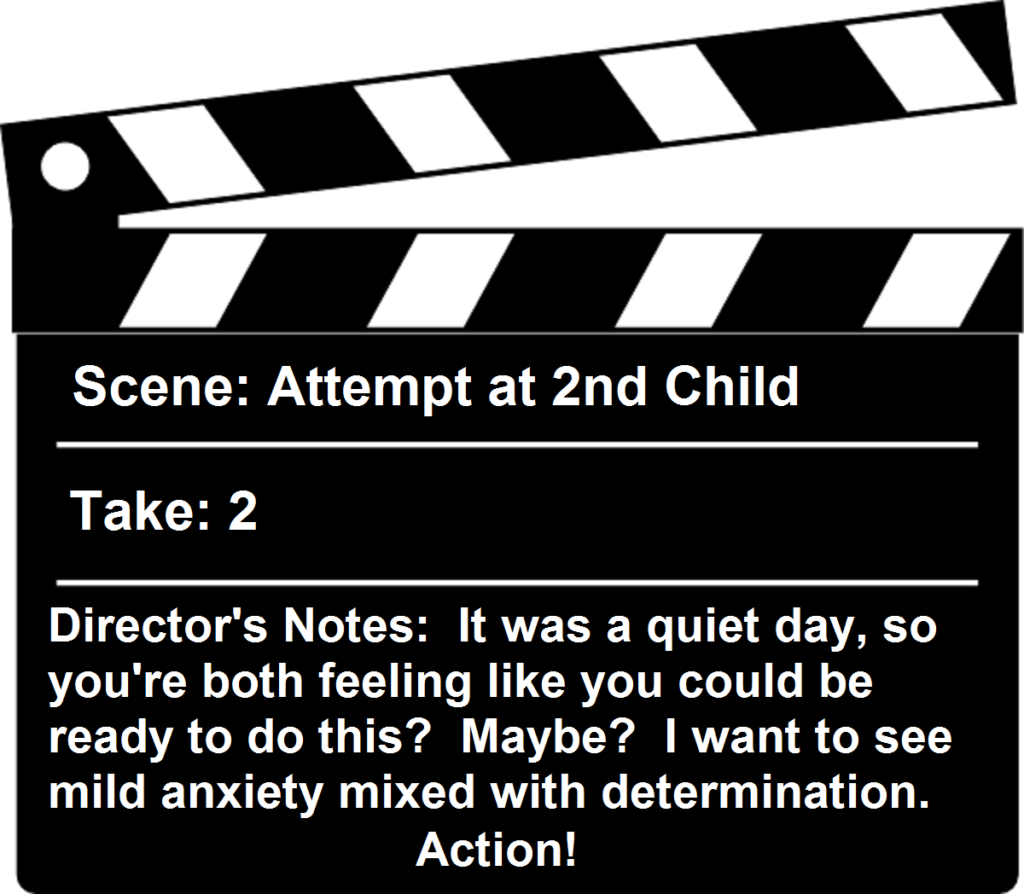 Man:  “Here we are, alone in bed with an uninterrupted thirty minutes at our disposal!   Would you care to create a second child right now?

Woman:  I am tempted, since even after the four minutes of child-creating intercourse, I will have twenty-six minutes of free time!

Man:  How wonderful for both of us!

With woman in his embrace, the two of them throw themselves onto the bed.  We hear a loud SQUEAK as the woman reaches down to reveal SOPHIE THE GIRAFFE.  Man once again attempts to kiss woman.  Woman rolls over on the bed onto an uncomfortable hard object and we hear an electronic voice say, “¡HOLA!  ¿QUIERES CANTAR  EL ALFABETO CONMIGO?”

Woman:  I apologize, I am no longer in the mood to create a second child with you.

Man: I am saddened, but I understand. 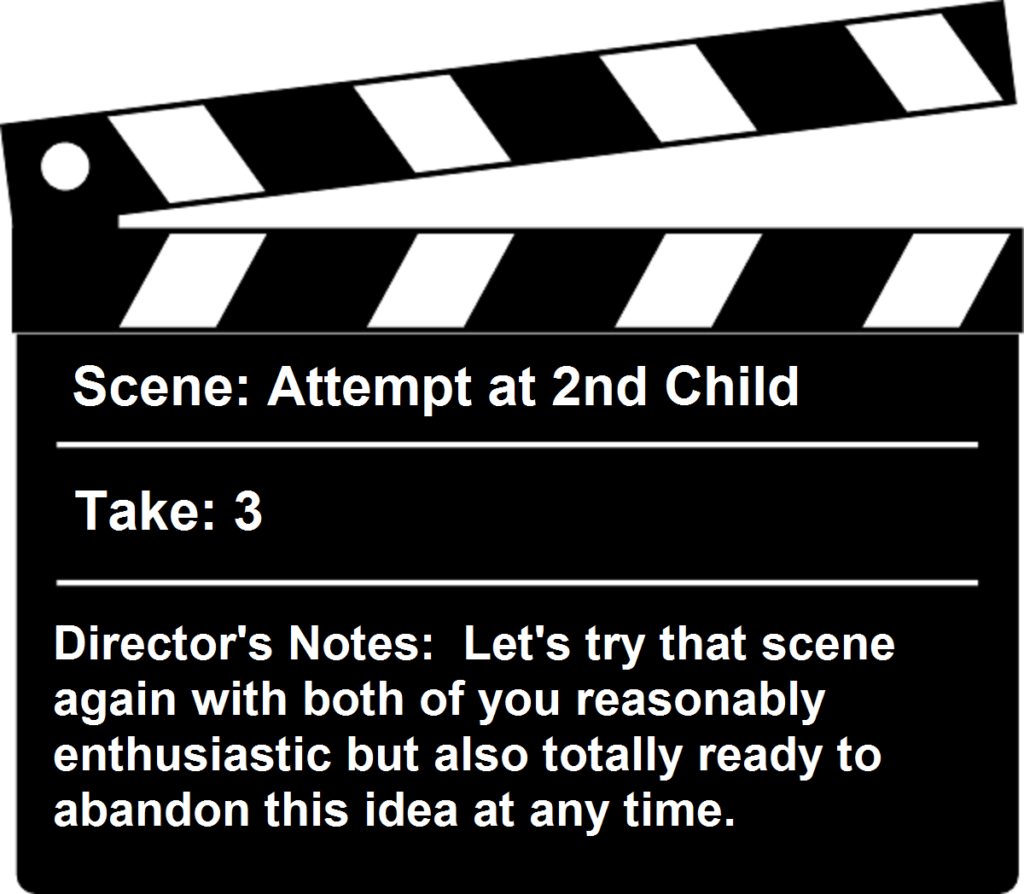 Woman:  You are in luck!  Not only am I in the mood to create a second child with you this evening, I have cleared our room of any distracting auditory toys!

Man:  I would love to make a child with you this evening!  (Lovingly kisses woman’s neck )

Woman:  I’m looking forward to it.  Tonight is the night that we—

Man:  WHAT IS ON YOUR NECK?

Woman:  I am not aware of any—

Woman:  PLEASE COME BACK HERE AND HELP ME GET IT OFF MY NECK! 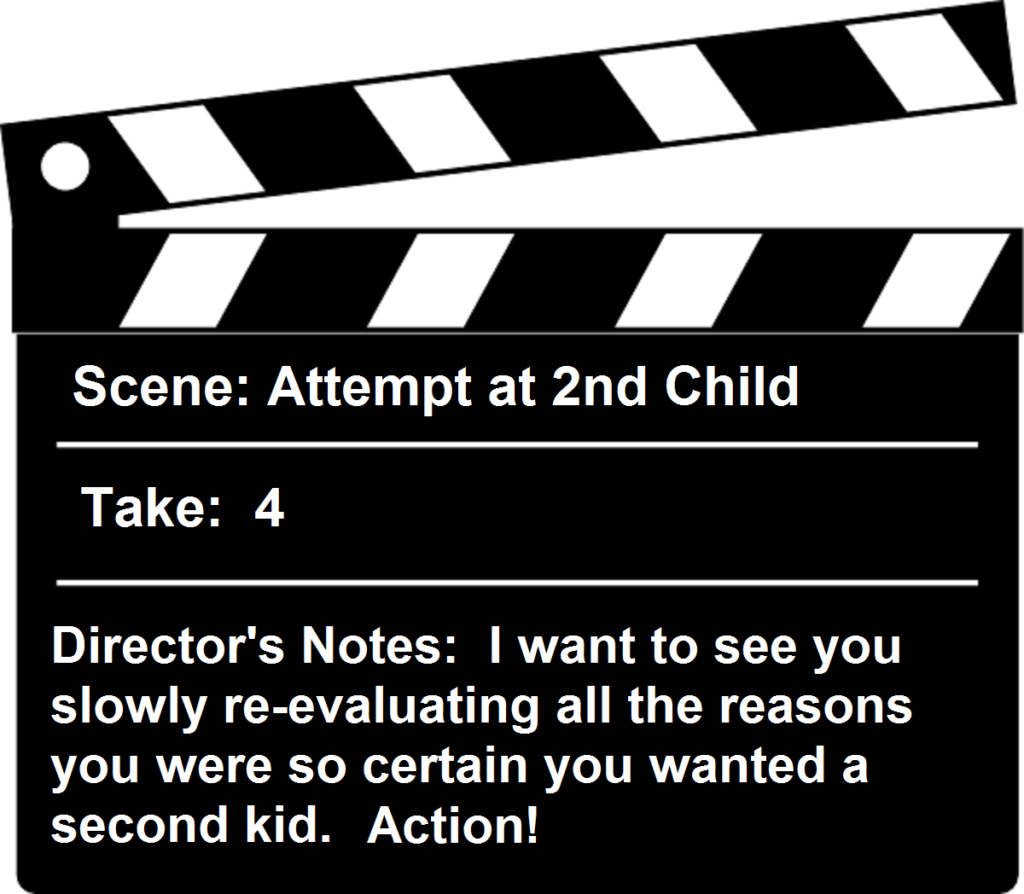 Woman:  The night is beautiful and young and the child is asleep!  Are you interested in maybe—

Man:  The Game of Thrones Finale starts in seven minutes.

Woman:  OH MY GOD, I FORGOT IT’S SUNDAY.  I’m grabbing a bag of pita chips and I’ll be right down. 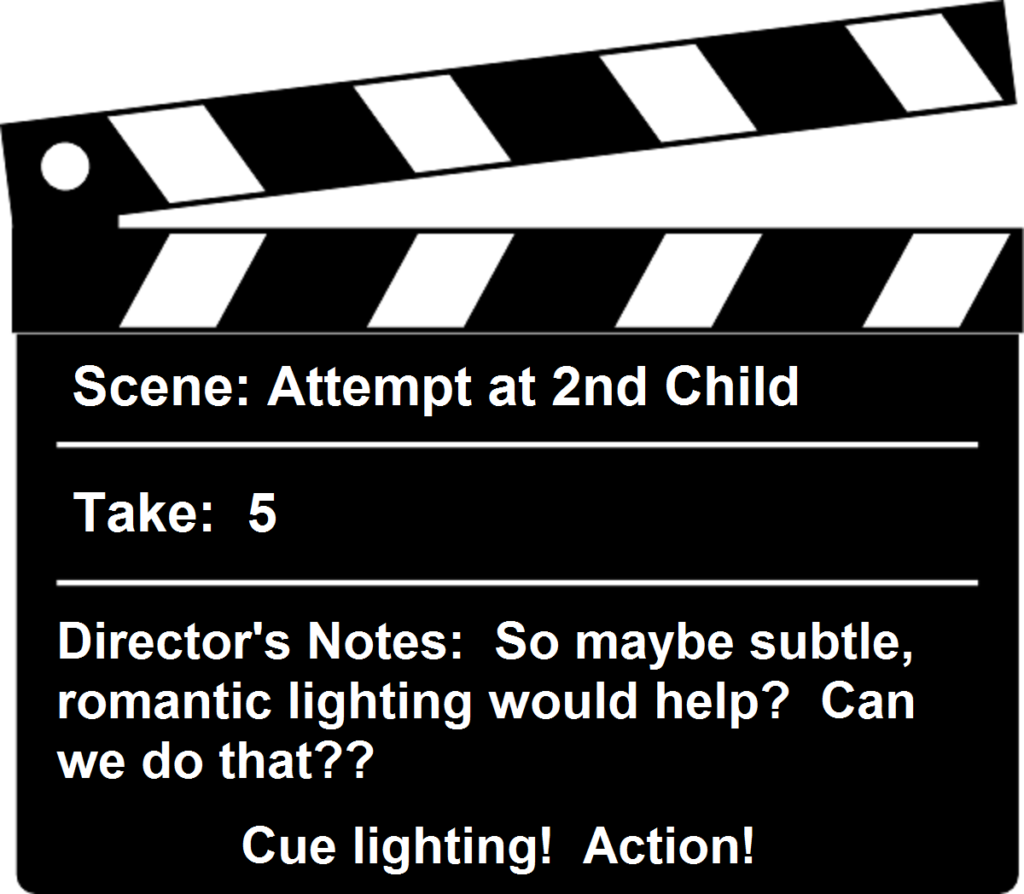 Man:  Now that season 6 of Game of Thrones is over and child #1 is asleep for the night, would you care to try for child #2?

Woman:  (Hands man a large sheaf of papers)  I would, except that I just looked at our 2015 finances and it appears we cannot even afford child #1.

There is a long, dramatic pause.

Man:  Could we feed him less?  Would your parents want him? 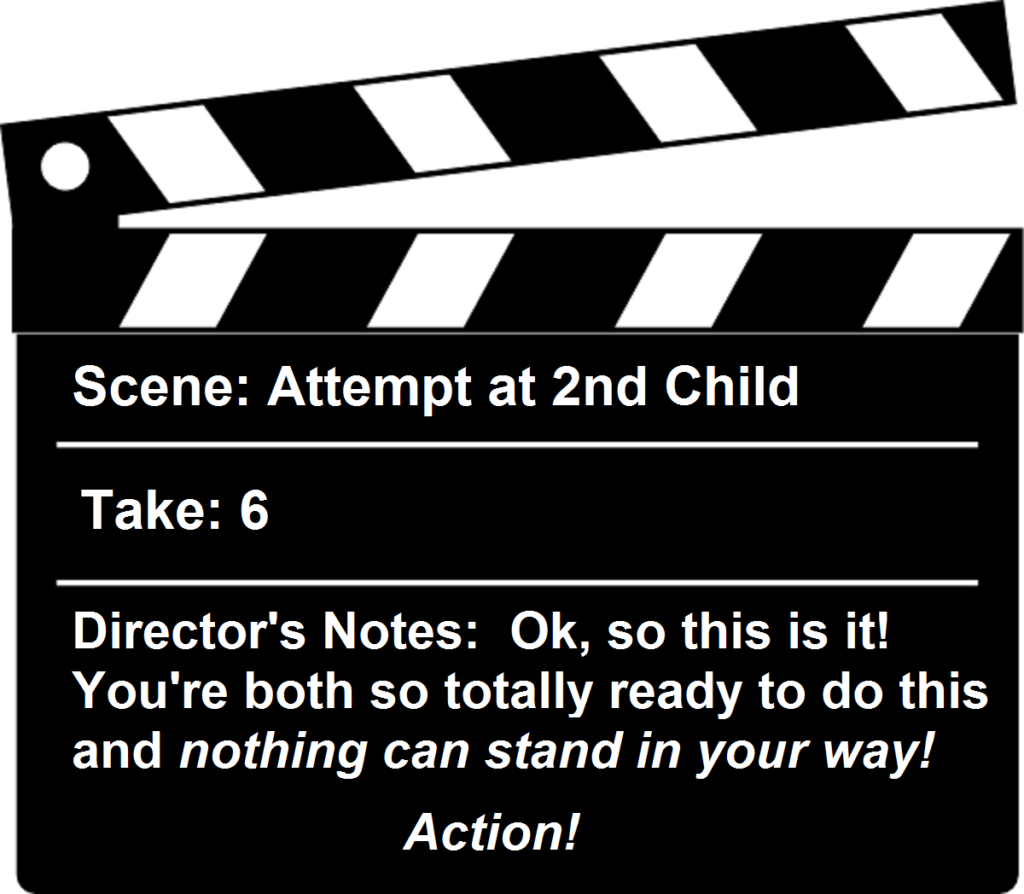 Woman:  I am totally in the mood to hop into bed and make an additional child with you!

Man:  I have been dreaming about making an additional child with you all day!

Woman:  Then this is it!  This is the moment we’ve been waiting for! 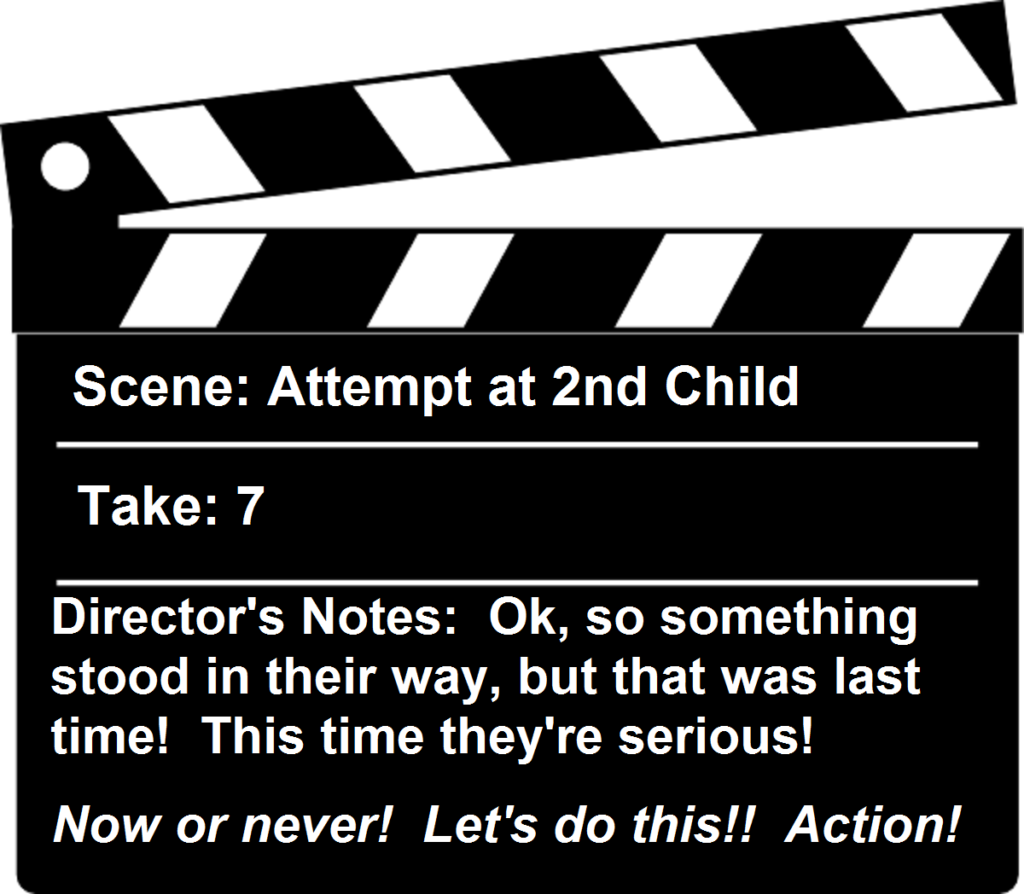 Woman:  I am totally in the mood to hop into bed and make an additional child with you!

Man:  I have been dreaming about making an additional child with you all day!

Man:  Then this is it!  This is the moment we’ve been waiting for!

Woman’s Body:  Have fun guys!  I won’t be fertile for another two weeks! 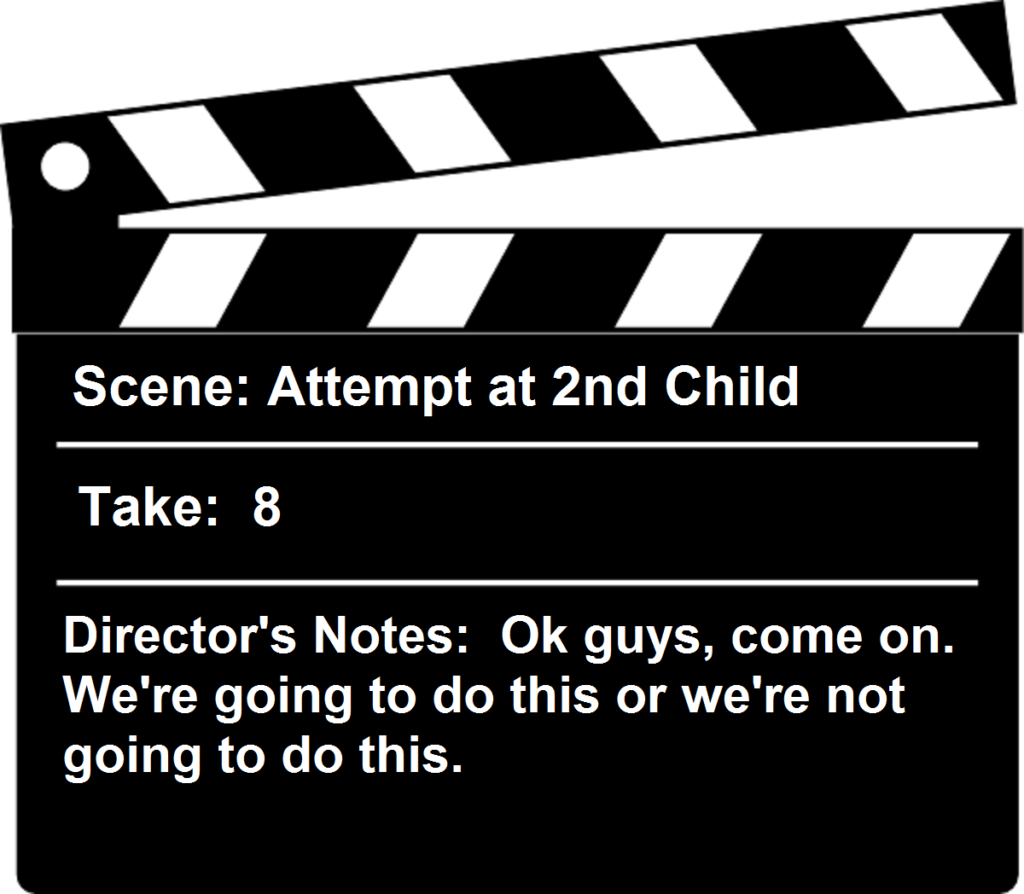 Woman:  No way.  Not with that stunt you pulled.

Woman:  YOU KNOW WHAT YOU DID.* 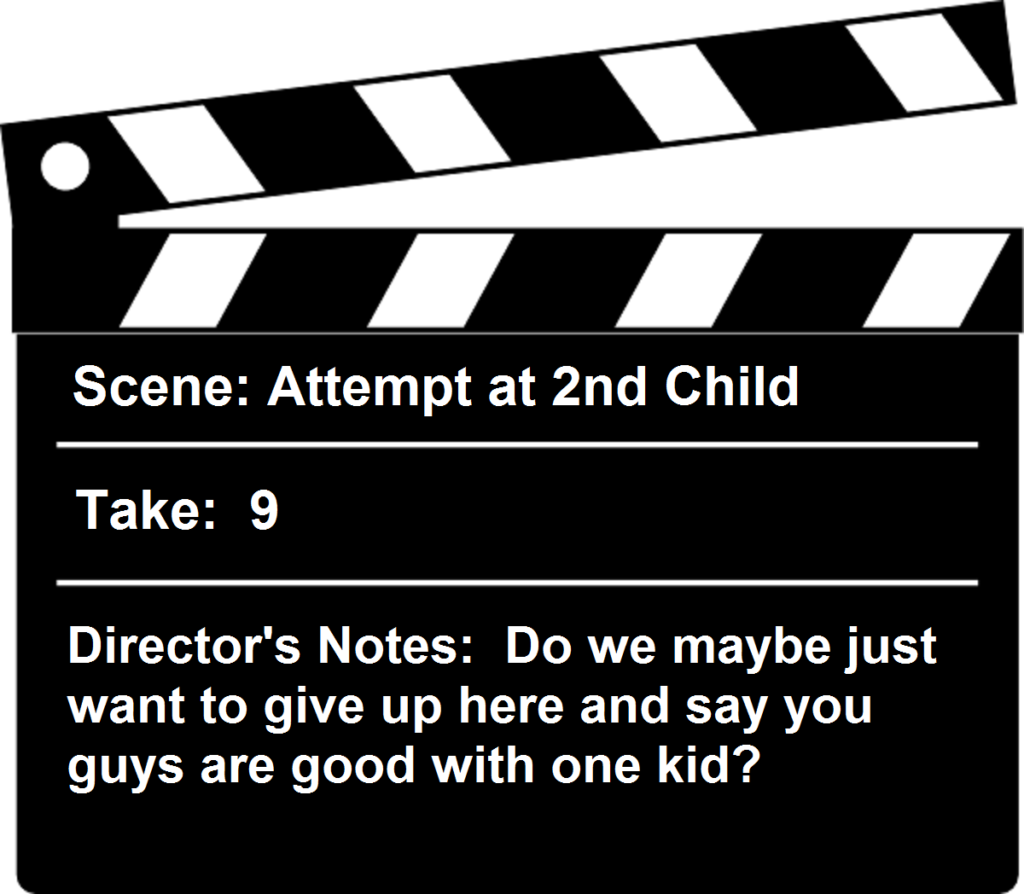 Man:  I was wondering if tonight might be a nice evening to make a second child with you, but you seem to be in a long term relationship with your Facebook news feed.

Woman:  (staring at phone) Hey, sorry, I just posted an unrealistically idyllic picture of what having children is like and I want to see how it does.

Man: So maybe we–

Man:  So you’re saying you’re not in the– 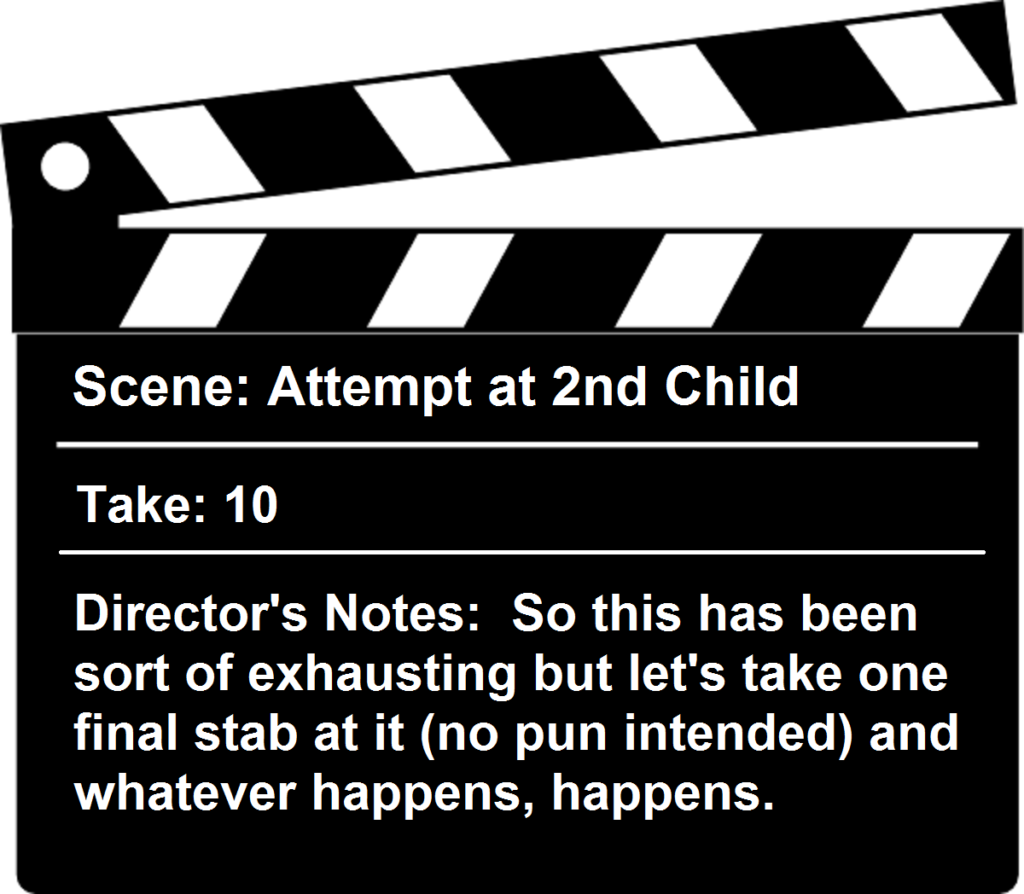 Woman:  It’s tonight.  Tonight is the night we buckle down and attempt to make a child.

Man and woman kiss and do this thing together that occasionally causes children.  I will not go into details, but it is an act that is well documented on the internet, if you should care to look.  They finish doing it and lie back together in the bed.

Man:  You’re nervous that after all that it didn’t work?

Man:  You’re nervous it did work?

Man: Are you both happy that it might have worked but also terrified that we won’t be able to handle a second child and simultaneously terrified at the idea of bringing a second child into this world?

Woman:  Are you not terrified at those things?

Man:  Oh, I’m totally terrified.  I just wanted to know if you were terrified.

They sit silently next to each other in the bed for a while.

Man:  Well, it’s nice to have someone next to whom to be terrified.

Man: Can I see that photo you posted last night?

Woman:  Sure (opens Facebook on phone) 51 likes!  That’s the one from last night, and if you click on the arrows, it’ll show you all the previous ones I’ve posted.

Man and woman sit up against the headboard, clicking back endlessly through photos.  They watch their first child grow younger and younger as they go back– from a toddler, to a young toddler, to a baby, to a newborn.  They watch the birth, followed by shrinking photos of her pregnant belly, followed by a photo of an early, blob-like sonogram, followed by a birth announcement.  They continue to click, and the photos of their family are replaced by photos of the two of them– in a bar and one at a family birthday and one where they are out camping with friends.  There are photos of them at their wedding.  There is an album of them traveling in South America and a photo where they are dressed up for some work event and others where they are standing nose to nose in a photobooth photo, smiling at each other.

Woman:  So are you.  Also, this second child thing is going to be so, so hard.

Woman:  We’re going to be at our wits end and want to strangle each other a lot of the time.

Man:  Absolutely we will.  We’ll both give what we think is 100% and secretly feel like the other person is only giving 70%.  And we’ll be constantly exhausted and sort of resentful.

Man:  So you’re sure you want to do this?

Man:  Me too.  Also, I know this sounds crazy because it’s literally only 8:45 at night, but do you want to give up on getting anything done this evening and maybe just go to sleep now?

Woman:  Since you asked me to marry you, I have never so enthusiastically said yes to anything.

They kiss and lie next to each other in bed, worried and hopeful about the future but, more than anything, just completely exhausted.  They are both asleep within five minutes.

I also have a book coming out this September called Welcome to the Club: 100 Parenting Milestones You Never Saw Coming which is available for pre-order at Amazon, Barnes and Noble and Indiebound.  It is short and has pictures and will give you a greater understanding of the forces at work behind the Spanish American War.  (Completely untrue.  I literally don’t even mention the war once!)

An earlier version of this piece originally appeared thanks to the lovely people at Glowing.com, which has apps that track either your fertility, your pregnancy, or your baby’s development.  I will forever love them dearly because they once wrote me a letter asking if I could comedically edit an article about diarrhea and I was like “Oh my god, this is all I have ever wanted to do in my entire life.”

That being said, here are three more links to pre-order the book cleverly disguised as spaghetti recipes.

The most delicious spaghetti in the world in just three easy steps!

You think you know spaghetti?  YOU DON’T KNOW THE FIRST THING ABOUT SPAGHETTI YOU FOOL!  CLICK HERE AND I’LL TEACH YOU HOW TO MAKE REAL SPAGHETTI!!

If you don’t care about any of these things and just want to move on with your life, here’s a link to a Wikipedia article about Mongooses.

Thanks again so much for reading.  You’re great.  Seriously.