I take my son to the American Museum of Natural History every month or so because it is an amazing, wonderful museum that is sort of close by.   Yes, there are a few “eh” exhibits that are interchangeable with taking an Ambien (*cough* Felix M. Warburg Hall of  New York State Environment *cough*)  But much of the museum is fascinating for people of all ages.

My son is just old enough to be excited about the museum.  About the huge African Elephants and the taxidermied buffalo.  About the enormous suspended replica of a blue whale.  About the many African gazelle-type creatures, at which he yelled, “Goat! Goat!” as I nodded and said, “Yes, buddy, it’s a goat,” because even as an adult I find it unlikely that he’ll be called upon to recognize a lesser kudu*.

And I, of course, felt like a wonderfully hands-on parent.  Look at me taking my kid to this museum!  What a great parent I am!  Ignore that previous photo of me trying to get my streaming Netflix to work so that my son could watch Curious George and allow me to check my e-mail for fifteen minutes.  That photo is not important!  Stop looking at it!  Look at this one of me walking him up and down the hall of African Animals.  Look at this one of me letting him wander through the hall of Biodiversity.  Surely I will be rewarded by a child who grows up to be a young Edward O. Wilson or an aspiring Desmond Morris.  Look at me, feeding him crackers while we watch a Meryl Streep-narrated informational film about our evolutionary history.  He will emerge from this day an inspired human being.

Except that despite all the elephants and dinosaurs and prehistoric fish he saw, the following day he seemed to have only one new word, which he was suddenly repeating incessantly.

He walked down the hallway of our apartment, his hand reaching back, indicating that I should follow him, and said, “C’mon.  C’mon.”  He did this for the remainder of the day and look, I’ve never felt like one of those parents who rushes her kids through everything, but sometimes your kids are the ultimate feedback of what you are doing.  He didn’t learn the word c’mon from one of his Alphabet books.  (C is for C’mon!  W is for What is taking so long?  I is for “I’M COUNTING TO TEN!”)    But as I looked back I realized how often I had said it.  When he was lingering by the enormous elevator.  When he wanted to spend twenty minutes touching the button on the water fountain and exclaiming “Water!” every time water came out of it, like some character in the Old Testament, overwhelmed by a miracle.  I said C’mon when he spent too long looking at the poster for the exhibit rather than going into the exhibit and when he kept looking at the same display of dolphins over and over while oblivious to other displays nearby that I wanted him to see.

And I felt terrible.  I felt like one of those mothers I am always trying so hard not to be.  If I had been on display in the hall of North American Mammals, the plaque near my taxidermied body would have read

The K’mon is native to many parts of the globe and is characterized by moving very quickly and wanting other creatures behind it to hurry up and move quickly as well.  It was named for its signature cry, “K’mon! K’mon!” and can often be observed repeatedly looking at its smartphone to check the time.  They often live in cities but can be found in all areas and climates.

And  I’m not saying I’m the worst parent in the world.  I’m not.  And in fairness to me (and other reluctant K’mons) children are SO SLOW.  The other day while walking down the street, my son was passed by a glacier.  If Nathans held a reverse contest to see who could eat hot dogs the slowest, he would blow everybody out of the water.  I’m just saying that I didn’t realize what I was doing.  I made a point not to rush him through the exhibits, but without noticing I was rushing him through other things that weren’t exhibits but in which he was equally interested.

And that being said, here is something I had not thought about for a long time.

One of my first friends from nursery school was a little girl named Jennifer Hix who lived in a Funeral Home (Her father was the undertaker, for anyone who immediately assumed she was a ghost).  And we would go and play in her yard, except that her yard was a parking lot and we would walk through her house except that her house was (again) a funeral home.    And I was very young and don’t remember much of what we had in common or what we played.  Most of the details blend together.  And the only reason I’ve held onto this memory at all was because of something I, at the time, found extraordinary– she had a water fountain in her house.  And I remember going home and asking my mother if we could get a water fountain in our house and my mother very patiently said, “No.  She has a water fountain because that’s a normal thing to have in a funeral home but we are not getting a water fountain installed in our house, end of discussion.”

My son isn’t old enough to read this, but I would like to tell him that I’m sorry about the other day.  I am an adult and I momentarily forgot that water fountains can be fascinating.  The next time he is standing in the hallway going, “C’mon, c’mon,” I will stop beating myself up for teaching him that phrase and will get up and follow him to see what he wants to show me. 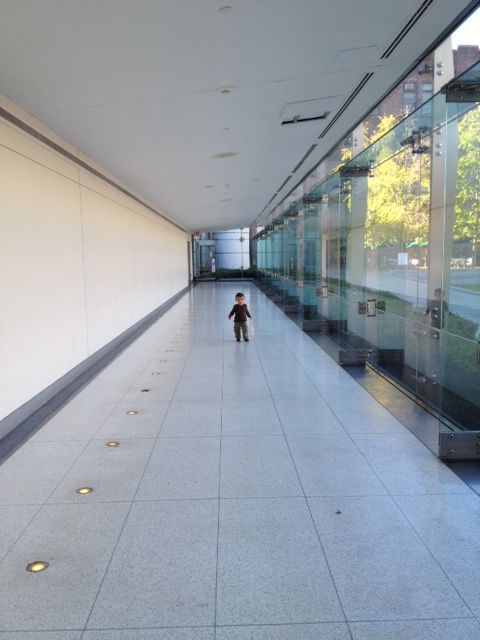 *Or a greater kudu.

If you enjoyed this post, please sign up to follow The Ugly Volvo on Facebook and Twitter or enter your e-mail in the sidebar to follow the blog.  I sometimes attempt to be moderately entertaining on those sites!  Or if you’re like, “Ugh, not moderately entertaining, I am so TIRED of reading things like that,” then here is a link to a random Wikipedia article.   I found it fairly dry.  But if you like that sort of thing then hey, good for you.

If you finished reading that boring Wikipedia article and decided you want to follow me on Facebook after all, here is a link to my Facebook page: A Complete History of Dinosaur Flatulence.